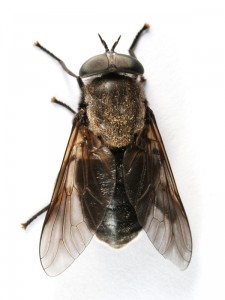 Sometimes still called “swamp fever”, Equine Infectious Anemia is caused by a retrovirus that is transmitted primarily by blood-sucking insects.  Once thought to occur only in humid regions such as the Southeast United States, its actual distribution is nearly worldwide, regardless of climate.  The EIA virus is a member of the genus Lentivirus, one species of which is human immunodeficiency virus (HIV).  Similar to HIV, this equine-specific virus invades and multiplies within macrophages – white blood cells that when functioning properly, destroy bacteria and other disease causing agents.  Since it suppresses the immune system, the symptoms of EIA can be vague, vast, silent, or severe.  Thanks to stringent pre-transport testing regulations, the disease prevalence within the US has been reduced to a fraction of what it was as little as three decades ago.  However, EIA has not been completely eradicated and remains a threat to horses everywhere.  There is no cure once the animal becomes infected; all horse owners should be aware of this disease and take measures to prevent its resurgence.

Once a horse is infected by EIA, and the virus begins to replicate, it will be present in many bodily fluids.  Biting flying insects transmit the virus when their feeding attempt is interrupted, causing them to rotate between horses until satiated.  The EIA virus, which is carried on the mouthparts of the vector, does not utilize the insect as an intermediate host and will not survive beyond a couple of hours unless introduced into another horse.  Horse flies and deer flies make suitable vectors as their feeding attempts are often interrupted; horses are particularly annoyed by and aware of these large, noisy fliers and the painful bites they inflict.

More obscure, yet still possible ways that Equine Infectious Anemia can be spread include iatrogenic infection (contaminated syringes and needles, for example), or by bodily fluid to blood contact (open wounds).  Dental and surgical equipment can be another pathway for infection if not sterilized between uses.  EIA may also spread from the mare to the unborn foal.

Some horses infected by the virus, as is the case with HIV in humans, may go undetected for quite some time after exposure.  Acutely affected cases may experience fever, loss of appetite, nosebleed, anemia (reduced red blood-cell count), jaundice (yellowing of the mucous membranes and skin), depression, and / or death.  Often, if and after the acute stage subsides, the infected horse will become an asymptomatic carrier of EIA.  Stress, coincidental illness, and excessive exercise / work can trigger a relapse of symptoms or sudden death in these animals.  Other horses will develop chronic and recurring symptoms, with fatality impossible to predict.  Unexplained weight loss is a common reason to suspect EIA in a horse that fails to thrive.

Equine Infectious Anemia exists almost worldwide.  Transmission is more likely in areas with heavy insect burdens.  All equids can become infected, although donkeys and mules are more likely to become asymptomatic carriers of the disease and possibly less likely to be suspected as reservoirs of the EIA virus.  The virus is especially capable of modifying its antigenic structure, making it difficult to develop vaccines that are effective at protecting against constantly changing viral strains.

In 1970, Leroy Coggins, DVM developed the agar gel immunodiffusion (AGID) test for EIA.  The “Coggins” test has been widely employed to stop the spread of EIA from endemic populations.  An enzyme-linked immunosorbent assay (ELISA) test, developed later, is slightly more sensitive, but also delivers a few false-positive results.  Positive ELISA’s are usually confirmed with the Coggins test.  Both methods measure the animal’s antibody response to the virus.  DNA testing (PCR) is capable of detecting the EIA virus itself, regardless of antibody response in exposed equids.  PCR is effective at detecting EIA in mules and donkeys that may have sequestered infections.

All 50 United States and many other countries have regulations in place that require a negative EIA test before the importation or sale of an animal.  The only effective vaccine that has been used in a large number of horses was developed and distributed in China.  While providing protection from the disease, it also causes horses to test positive for EIA, preventing the animals from ever being allowed to enter other horse populations.  There is no approved vaccine in the US.

If an animal tests positive for Equine Infectious Anemia, it is required to be indefinitely isolated from healthy horses.  It may not be transported, moved across state lines, shown, sold, or bred.  There is no way that is currently known to remove the virus from the animal, and treatment is merely supportive.  That said, a horse may survive for years with the disease.  Laws do not require euthanasia of positive horses; however, it must be carefully considered whether resources are available to continually treat the infected animal.  Inhumane suffering is no alternative to euthanasia, and the potential exposure risks to adjacent populations must be realized and avoided.