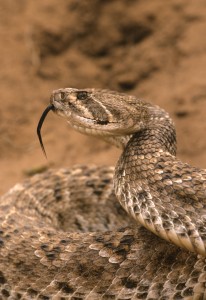 Horses share common stomping grounds with many other creatures that would prefer that they didn’t.  Snakes and horses are two animals that will be at odds from time to time.

Despite the horse’s enormous strength and size by comparison, the snake in a confrontation has the advantage of camouflage and covert weaponry.  Tiny, needle-sharp fangs not only deliver a sharp sting to the curious muzzle, but may also carry with them biological and chemical agents of warfare.

While the superficial punctures inflicted by a snake’s teeth are quickly shrugged off by a horse, bacteria transferred from the snake’s mouth may continue the attack for days and weeks to come.  Furthermore, venomous snakes may inject locally and systemically toxic compounds that can subdue a horse many times the snake’s size.

In North America, most venomous snakebites to horses come from members of the pit viper family of snakes – rattlesnakes, copperheads, or water moccasins.  Their venom is capable of causing severe localized tissue damage but is rarely potent enough to cause direct systemic toxicity in an animal the size of a horse.  Coral snakes are one exception whose venom is neurotoxic to even horses.  They are unrelated to pit vipers and are found in the southern states.

You may not be immediately aware that your horse has been bitten by a snake.  Bites are usually found on the nose, muzzle, or lower limbs.  Horses will usually have stumbled upon a snake while grazing or being ridden, rather than the weary snake seeking out the horse for a confrontation.  Bites can occur any time of year, although snakes are more active during warmer months.

Snakebites in early presentation will usually appear as two small punctures, about an inch apart, in the center of a swollen and bruised area.  Reaction to venom can cause a great deal of tissue edema – intracellular fluid, and tissue sloughing – tissue death.  The wound site may open and drain, and the original bite wounds may not be obvious after some time.

If a bite occurs around the face, swelling may affect the mucous membranes of the sinuses, mouth, and upper respiratory passages.  Respiratory distress, or even suffocation, can ensue if left unchecked.  Consult with your veterinarian about placement of rigid tubing (e.g. 60cc syringe casing) in the nostrils to keep an airway open until arrival by doctor.

In some cases, bacterial toxemia, which can occur as a result of either a venomous or a “harmless” snake’s bite, is a secondary complication that may be a bigger concern than venom toxicity.  Systemic inflammation may result from endotoxins released from bacterial colonies that have been introduced via the bite wounds.

If you suspect or witness a snakebite to your animal, the first thing to do is to stay calm.  Move the horse away from the snake to prevent subsequent attacks to the horse and yourself.  Some have claimed that it is critical to observe the type of snake responsible for the bite in order to ensure appropriate treatment; furthermore, it has also been said that you should attempt to collect the snake for confirmation of species.  This is not only unnecessary, but also unwise.  Do not put your horse, yourself, or other people at risk of being bitten.  You may only make the situation worse.

The treatment for snakebites is usually supportive and in response to symptoms that arise.  Antivenin, an antidote for snakebite venom, would seem like an urgent solution that warrants a gallop to the vet; however, it is derived from equine antibodies, thus its use holds risks all its own for the horse and is controversial if not contraindicated.

Do not attempt to remove snake venom from the site of the wound by any method.  Folkloric remedies such as cutting open the wound and sucking out the poison puts your horse and yourself at risk of more serious consequences.  Never use a tourniquet on any part of the animal.  Ice packs, heat packs, and other remedies are unnecessary and may also cause further problems.  Instead, keep the horse calm and call the veterinarian as soon as possible.  Halter and stable the horse if possible, and stay with him until the vet arrives.

If the bite wound is old, it may have abscessed.  In which case, it will be irrigated with antiseptic solution and treated with antibiotic preparations.  If it is fresh, the veterinarian will prescribe antihistamines or NSAIDs to reduce inflammation of local and respiratory tissues and antibiotics to prevent bacterial infection and toxemia.  Usually corticosteroids are avoided in snakebite cases, but may be warranted in the case of extreme respiratory inflammation or as a life saving measure.

Oral or intravenous fluid and electrolyte replacement may be needed if the horse succumbs to the toxic effects of snake venom or if bacterial toxemia results from established infection.

In most cases, snakebites to horses have a fair prognosis; recovery however relies on quick but calm action by the horse owner.