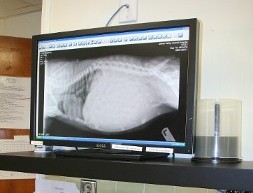 Imaging in veterinary medicine has advanced greatly since the first radiographs (x-rays) were taken of pets just decades ago. Now there is a multitude of imaging tests available to help diagnose and treat diseases in our pets. These tests include radiography (x-rays), ultrasound, CT (or CAT) scans, and MRI scans. Each of these tests has its own advantages and disadvantages, and will provide the veterinarian with different information. Radiographs and Ultrasound are available at The Animal Hospital, but CT and MRI scans are only performed by specialists in large referral practices.

A radiograph, commonly called an x-ray, is a black and white two-dimensional image of the interior of a body. An image is generated by passing radiation through a particular structure or area, such as the chest or a limb, and the image is then captured. The traditional way of recording the image is on specific x-ray film that senses how much radiation passes through the structure and reaches the film, much like photographic film captures light. The denser a tissue is (such as bone), the whiter the image is on the film. Less dense structures, such as air in the lungs, allow almost all of the x-ray energy to pass through to the film, turning that area black. 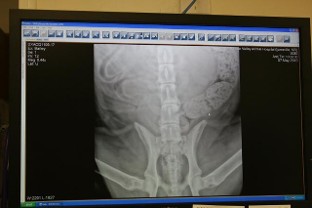 Radiography is the most common and readily available imaging test in veterinary practice. It is used to evaluate the size and shape of organs such as the heart and lungs, as well as to demonstrate fractures (broken bones), some foreign objects, fluid accumulations, and many more abnormalities that may aid in diagnosis. It is also the most affordable imaging test, and is most often done prior to any of the other imaging options.It cannot see everything however and ultrasound is often necessary to get a deeper understanding of disease.

Green Valley Animal Hospital has upgraded to digital radiography. The principles are similar, but the images are captured on a digital recording device and displayed on a computer screen. No x-ray film is used. These images are easy to store as well as to transmit to other hospitals, or to copy to send home with you the pet owner.

The advantages of digital radiographs over regular films are eminence. Digital xray allows our doctors to change the contrast on a picture so that soft tissue and bones can be looked at in a different light – so to speak. Basically digital xrays allow us to have much more information and detail than plain film.