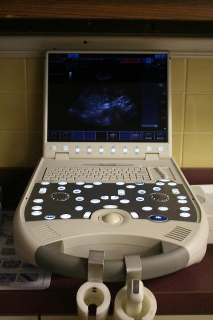 Unlike radiographs, no radiation is used in an ultrasound. An ultrasound uses sound waves. The ultrasound waves move out from the wand and either become absorbed into organs, pass through them, or are reflected (echo) back. Depending on how many sound waves are absorbed or reflected, an image of the internal organs is formed that can be seen on a monitor.

Ultrasound is painless and does not require anesthesia or even sedation in most cases. For an ultrasound evaluation to be done, the pet needs to have the hair shaved from the area to be evaluated, as hair will interfere with the images.

This test is typically done after blood tests, x-rays, or a physical examination indicates a possible problem. It is useful for evaluating things like abdominal organs and the reproductive system. As with people, it can be used during pregnancies. There is a specific ultrasound called an echocardiogram that is used to visualize the heart and blood vessels as well as the valves of the heart.

Ultrasound can “see” some things that can’t be visualized on radiographs. For example, if the abdomen is filled with fluid, the organs can’t be distinguished on traditional x-rays because fluid and tissue have the same density. However, they appear quite different from each other on an ultrasound image, so we can see through the fluid. It is also useful, for the same reason, for seeing inside an organ such as the heart or liver. An xray may show the outline of an organ the the ultrasound looks inside to see if there are problems not seen on the xray.
Ultrasound, on the other hand, it is not good at seeing through air or bone, so it does not replace radiography but rather is complementary to the information we can get from radiographs. It is common to do both x-rays and ultrasound in order to get a complete picture of what is going on with a patient.